There are few words that we rarely use in day to day C# practices[I’m focusing readers who are beginners]. But I’ve seen them in either online exams or other IT quiz shows So I came to write something about those untouched keywords. Below is the list of these keywords

Lets get to know about them which one is used where and when:

The below example you can see we’ve a CustomType that takes Integer value as its initializing value and after defining the Implicit operator It becomes directly castable to int. 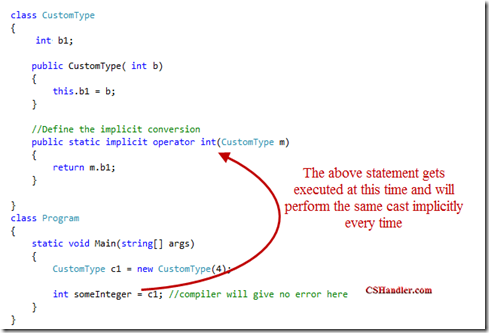 Unlike the Implicit it enforces the explicit cast to mention when a type is declared with conversion operator.

Volatile is kept under the category of Modifiers. The volatile keyword indicates that a field can be modified in the program by something such as the operating system, the hardware, or a concurrently executing thread.

Behavior: The system always reads the current value of a volatile object at the point it is requested, even if the previous instruction asked for a value from the same object. Also, the value of the object is written immediately on assignment. And due to such behavior  volatile modifier is usually used for a field that is accessed by multiple threads without using the lock statement to serialize access. Using the volatile modifier ensures that one thread retrieves the most up-to-date value written by another thread.

The type of a field marked as volatile is restricted to the following types:

Before we start I want to show you some code:

Are you expecting this output in you application or Program. Better you throw an exception if you system is dealing with sensitive data. If you think so.. then use Checked.

Similarly if you want to Skip such check always if your application or logic is flexible and ineffective by the resulting values then use unchecked.

Output would be the same as we had without using checked.

if neither checked nor unchecked is used, a constant expression uses the default overflow checking at compile time, which is checked. Otherwise, if the expression is non-constant, the run-time overflow checking depends on other factors such as compiler options and environment configuration.

So here we are at Interview Question. I’m sure these words are mostly used in code. So I’m not going show any demo for their use but to discuss some interesting answers that your interview would like

A constant member is defined at compile time and cannot be changed at runtime. Constants are declared as a field, using the const keyword and must be initialized as they are declared.

Constants must be a value type (sbyte, byte, short, ushort, int, uint, long, ulong, char, float, double, decimal, or bool), an enumeration, a string literal, or a reference to null.

I hope this post provide some quick and useful information to those who are beginners in C#.