A common practice observed during design or development of a service component; is heavy usage of ServiceFacade. According to Façade definition, A facade is an object that provides a simplified interface to a larger body of code, such as a class library. In this post I’ll be discussing about the challenge that are faced with ServiceFacade classes while working on SOA (Service Oriented Architecture).
Note: In this article we’ll be using WCF service contracts for sampling. The language is C# and code editing tool used is Visual studio 2013.

Let’s take a look at the high level design of Façade pattern. 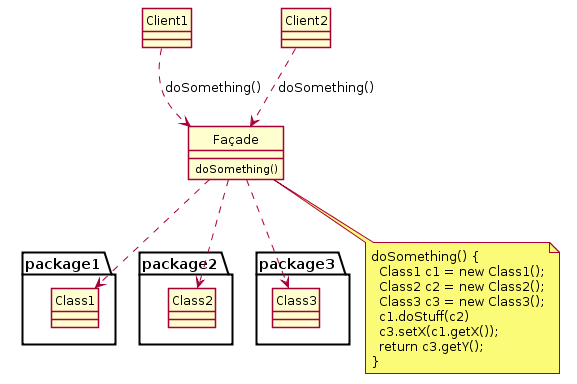 Usually when the services are created we only concentrate on developing the server side functionality without thinking of fact that how service could grow in future because of the business. A simplest example, creating a service that manages products of an eCommerce site. Suppose the product service provides following operations:

Let’s take a look at the usually seen implementation of above contract: This is Façade pattern in real life scenario. I would call it service façade since we are talking in context of SOA. When we look the above service façade sample, it seems fine, right? Unless the business decided to add/replace/remove/re-locate an operation to another service. Now think about removing the Get() method from Product contract to some other service contract. The whole logic written under Get() will be demolished or might not work when moved to another service contract. Why? Because it’s tightly coupled with Façade here.
Figure below illustrating the coupling of CoreLogic and ServiceContracts:

Let’s take a look at the downside of such Facades in SOA especially on services side:

The coupling of the core service logic to contracts and implementation resources can inhibit its evolution and negatively impact service consumers.

“When a service is subject to change either due to changes in the contract or in its underlying implementation, this core service logic can find itself extended and augmented to accommodate that change. As a result, the initial bundling of core service logic with contract-specific or implementation-specific processing logic can eventually result in design-time and runtime challenges.”
[Ref. SOA Design Patterns by Thomas Erl (Chapter 12)]

1. A huge bodied class carrying out all business logics (or core service logic).

2. Class became larger and larger as more methods will get added.

3. Hard to Unit test due to lengthy methods.

4. A centralize place where multiple developers will be working on it fix bugs/adding new operations. Now you can imagine how this central place can easily be polluted with stuff.

Considering both scenarios; ServiceFacades are problems and may become problem in future for maintenance so I decided to write this post as reference to developer seeking solution to this problem.

The problem can be solved by separating core logic from service contracts(façade) to separate self-operating entities. Figure below illustrates the idea of separating the Contracts from CoreLogic:

From implementation point of view let’s try to solve this problem using CommandPattern.
Why command pattern?

A command can represent individual operation of service contract. Then we can use a dispatcher to invoke a particular command. Also the Core logic of individual operation can reside in commands. This is “An approach” to solve above problem.
Note: The implementation of CommandPattern that I’ll use in this post might differ from the samples given on various sources. Design patterns are Notion to use the power of Object Oriented world. Implementation can vary but it shouldn’t violate principles.

Figure below shows the Idea of using commands and redirecting each operation request to dedicated command via command dispatcher.

Now let’s go back to the code and create a new project which will consists of Commands representing each operation from Service Contract. So let’s create a class library project and name the project “ServiceOperations”. Well I just named it because “Naming is one of the hardest thing in computer programming world”. :)

In this project we have 3 project folders which I have created for separating the classes by their respective responsibilities.

Add the Core Logic to fetch the product here. Build an error response if anything goes wrong. This is how the final class would look like after doing the patching work.

Now if you want you can also write some unit tests against the Command testing the individual logic of each operation. Instead of testing the whole big old mud ball service façade.

Core logic is now moved from Service contracts to a dedicated command. Now we need find a way to send those operation requests to respective commands. Let’s create a class CommandDispatcher. This class will have only Dispatch method which will actually take the command dispatch it to their respective command handler.

This CommandDispatcher is doing following work:

1. Register instances of all the command handlers (this work can be replaced by using DI container).

2. Locate and execute the command on its handler via Dispatch method.

To test the Dispatcher I’ve created a few tests around ( ..and actually found couple of bugs to fix before using the code in this article). Refer to the sample solution here on github.

That’s it. Pretty clean huh! Question yourself what impact would be move Get() method from this contract to another contract or completely removing the method from service contract. Yes, Remove it right away the Core Logic is safe and sound and can easily be used in another service. Also we have no dependencies of the system on contracts anymore. Core service logic unit is abstracted via CommandDispatcher and Commands. Such implementation promotes more cohesiveness and less coupling in the system.

I’m sure some readers might have observed that we have introduced a new design patterns as well while refactoring. Now Service contract is actually behaving as Adapter class for its consumer and the core service logic unit i.e. BusinessLogic. That’s how, IMO, the service contracts should behave in the system.

There are Pros and Cons (not much) of using this separation so before we wrap up let’s take a look at them.

4. Each command is representing a service operation which is placed in a dedicated class means more scope to do with operations.

1. Boilerplate code. (This complain usually heard from developers. But this boiler plating is worth for long run, and of course it can also be optimized by techniques like Aspects Oriented Programming)

2. Additional mapping of Contacts and Business Entities. (This can be handled by using an awesome utility Automapper). Thanks to Jimi and community developers doing this great piece of work.

For further reading on best SOA practices and patterns I would suggest to read “SOA Design Patterns” by Thomas Erl.

Solution used in the blog post is hosted on Github here.