Isaac Newton once said he stood on the shoulders of giants. Dennis Ritchie was a giant whose shoulders people like Steve Jobs stood on.

Dennis Ritchie, Creator of the C Programming Language & UNIX is dead at age 70.....all programmers owe him a moment of silence! Read his biography at Wikipedia.

Pioneer of Computing Resting in Peace...
*Dennis Ritchie has graduated from Harvard University with degrees in physics and applied mathematics and has started began working at the Bell Labs Computing Sciences Research Center and received a Ph.D. from Harvard.
*He is the creator of the C programming language and a key developer of the Unix operating system, and as co-author of the definitive book on C, The C Programming Language 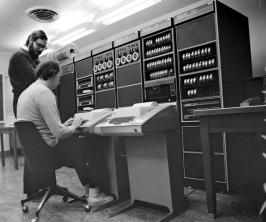 * He is one of the pioneers of modern computing. The C language is still widely used today in application and operating system development